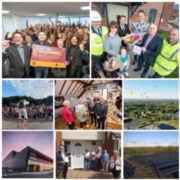 Fighting off stiff competition, Telford & Wrekin Council scooped APSE Overall Council of the Year at the APSE Service Awards 2021. The Council spoke to APSE Direct and revealed the secrets to their success.

Telford & Wrekin Council is a local authority that just won’t stand still.  It has a growing reputation for excellence coupled with ambitious plans for the future.  It doesn’t just talk about creating a better borough, it’s actually making it happen.

A unitary authority in the West Midlands, serving just over 181,000 residents it packs a powerful punch.  So, no surprise it was crowned overall Council of the Year in the 2021 APSE awards.

Like all local authorities the past year has provided many challenges.  At Telford & Wrekin throw into the mix major flooding as well as a serious fire on a disused recycling plant, you’ll find not only a resilient council but one that shows leadership and enterprise.  Politicians and officers work together with a ‘one team’ philosophy to deliver intelligence led, community focused services to residents and businesses day in, day out.

This summer an LGA peer review praised the Council’s drive and determination. It recognised its recent success in OFSTED moving children’s services from ‘requires improvement’ to ‘outstanding’, as well as ADASS rating adult social care as ‘exceptional’.  It also commended the council’s success in drawing in funding and tapping into regional and national initiatives to help shape the borough and drive it forward.

“Winning APSE Council of the Year is the culmination of years of sheer hard work, grit and determination.

“Government budget cuts and the pandemic have led to some of the toughest times we’ve ever experienced but we have a clear vision to ‘protect, care and invest to create a better borough’. This steers everything we do.

“It’s the combination of our can do attitude and in-depth knowledge of the communities we serve, coupled with sound financial management and some shrewd investments that have seen us recognised for some of the best council services in the country.”

Central to the Council’s approach is a commitment to invest to create jobs and bring prosperity.  It has a ‘business supporting, business winning’ ethos.

Telford Land Deal, a unique 10 year venture with Homes England, has so far seen the creation of 24 commercial sites attracting big international players such as Magna Castings and 1,400 jobs as well as 14 residential sites and 753 homes.

The deal has also generated £3.8 million profit for the Council, a proportion of which is being reinvested into 15 new incubation units and grow-on space for small companies, future-proofing employment and growth.

“Investing in this way creates a virtuous circle. By attracting and supporting business, we create growth, jobs and bring people to live and work in the borough.  As a result, we see increased business rates and council tax that we can reinvest.”

It’s a model that not only works on employment sites but in the borough’s high streets too.

The Council has invested £3.6 million to date in their Pride in Our High Streets programme and committed a further £4.8 million over the next two years to support physical regeneration and a series of community events to drive footfall and boost business.

Southwater has revitalised the town centre, creating a vibrant destination designed to deliver a thriving night time economy.  Now the Council is moving on to deliver a game changing £100m Station Quarter development, that’s been awarded £22.3m from the government’s Towns Fund and will bring a new gateway into the town.

Telford & Wrekin’s has had to navigate budget cuts like other authorities but the challenge has given them the opportunity to innovate.

“We’ve worked hard to deliver savings of £120 million but we’ve also created new income streams to protect our front line services and continue to care for the most vulnerable. Because of this, our annual outturn has been within 1% of budget.”

One of the Council’s flagship companies, NuPlace, is a wholly council owned company providing 4000 homes for private rent whilst driving up local housing standards. It generated £1.2 million in revenue for the authority in 2020/21 and has raised an additional £2.3 million in council tax and new homes bonus.

The authority was also one of the first in the country to establish a solar farm, not only contributing to tackling climate change but also generating £200,000 in revenue every year.

“It’s the culture at Telford & Wrekin Council which is vital to our success.

“We’re small enough as an organisation to work as a family and as a co-operative Council we work hard to maintain positive relationships with our partners and communities.

“So when we need to dig deep and act quickly, we’re in a great place. Never has this been more apparent than in our COVID response and I’m incredibly proud of what we were able to achieve together”.

When the pandemic hit, the Council rallied to support its communities.  As part of the response the Council provided direct support to one in five households. Over 52,000 meals were delivered to low-income families (ahead of government providing support), 726 laptops delivered to children in need and 262 kindles to those in residential homes.  The council’s community support team mobilised over 1,300 volunteers who provided assistance such as shopping and fetching prescriptions to over 20,000 shielding households

Telford & Wrekin Council has a reputation for business but is an organisation with heart.  And that’s a winning combination.