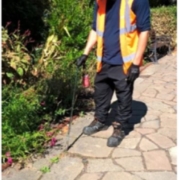 Ian Ross, Head of Parks and Leisure Services at Lambeth Council, outlines his team’s nature-friendly approach to tackling weeds; with a focus on the Council’s promise not to use herbicides for routine grounds maintenance except for in instances where there is no alternative.

Autumn 2021 saw the final piece of the jigsaw fall into place for the London Borough of Lambeth being a chemical-free borough, when the Council’s new Environmental Services contract began. The journey had begun over five years prior, when as part of the Council’s in-sourcing of parks maintenance, the then head of service had sought to restrict the use of chemicals as part of the development of the new service specification.

Things really gathered pace for Lambeth in 2018 when we signed up to the Pesticide-free London pledge – led by Councillor Claire Holland, then Cabinet Member and now Council Leader. The Council’s Parks Service were able to confirm that it had stopped all use of chemicals, except for treating noxious weeds such as Japanese Knotweed.

Colleagues in Housing followed the lead set by Parks in 2020 when they stopped the use of chemicals on housing estates and as highlighted above when the Council’s new Environmental Services contract started in Autumn 2021, the council could proudly say that all council-maintained areas were herbicide-free.

To formalise the decision taken in 2018, in 2019 the Parks Service produced an Integrated Pest Management Policy, which outlines why the decision was made and how weeds will be managed going forward.

As part of the development of the Integrated Pest Management Policy, staff in Parks tried numerous alternatives to spraying weeds with chemicals (mainly glyphosate). This includes treating weeds with hot water, mechanical weed-rippers, strimming, flame guns, mulching and hand weeding. The Council’s experience was mixed but the standout learning was that all alternatives were resource intensive compared to chemical treatment.

Where parks were lucky was that there was an existing pool of stakeholders happy to assist – this is probably the same across the country for parks. They have been very supportive by adopting specific areas and assisting parks staff with hand weeding.

Contractual requirements stopped the adoption of a chemical free approach on the Borough’s streets before the new contract started, however with an ever-engaged population increasing pressure over environmental matters, the Council realised continuing as is would not be acceptable. With this in mind, the Council offer residents an opt-out scheme where streets with a consensus can opt out of having their street sprayed with chemicals. This was a popular option, so much so that even under the new contract where streets are now just mechanically swept once a year to remove weeds, streets can still opt out of having this done.

It hasn’t all been plain sailing and there are some emerging challenges that the Council will need to deal with in the coming months and years. One of these is the maintenance of sports pitches where traditionally they would have been sprayed with a selective weed killer. With this no longer happening, the Council is finding sports pitches have an ever-increasing coverage of weeds. Wanting to be proactive, the council engaged the services of the Grounds Maintenance Association to undertake a survey of the council’s largest site for sports, Clapham Common, and was also successful in applying to be part of the Football Foundation’s Local Authority Grass Pitch Programme.

Another area where the Council has struggled has been with the maintenance of green areas on housing estates. The maintenance service was in-sourced in February 2021, becoming part of the existing and successful in-sourced parks maintenance service. As many of you will know, the summer of 2021 was a phenomenal year for grass growth! This coupled with the residual effect of previously sprayed chemicals wearing off fence lines and shrub beds created a perfect storm. With fence lines and building edges previously treated with chemicals now needing to be strimmed; and shrub beds previously treated with chemicals now needing hand weeding, it is fair to say the first year of the new service was a struggle.

However, like parks, the Borough’s housing estates have some committed and engaged residents who want to see areas managed differently to encourage more biodiversity – an approach that has been used over the last couple of years in the Borough’s parks. A more relaxed management regime will be rolled out over this coming summer across the borough with an initial eight pilot sites on housing estates; it is hoped this will free up resource to deal with some of the service deficiencies experienced last year. The council will also be participating in the No Mow May campaign on all housing open spaces this summer.

So, what advice can Lambeth offer to other local authorities considering stopping the use of chemicals? Good communication is key - ensuring residents understand why this is being adopted. Being realistic is another key factor; our experience is there isn’t a replacement at the moment that can fill the gap that chemical treatment had, so as a matter of course there are going to be more weeds (wildflowers?) in the public realm.

Our experience is that residents are supportive of this move and from a parks perspective it certainly hasn’t impacted on the popularity or resident satisfaction with them, with the Council’s most recent resident survey seeing parks voted as the best thing about living in Lambeth.

All the above now also forms a key part of the borough’s Climate Action Plan with the Council being ambitious in its desire to tackle climate change and improve biodiversity and ultimately the environment for our residents.

Ian spoke on this topic at the APSE Parks Seminar on 30 March. You can download Ian’s presentation here.